For a limited time only between late May and early June, snow melts in Kagami Pond situated near the summit of Mt. Hachimantai. This phenomenon is called “Hachimantai Dragon Eye” due to its likeness to a dragon’s eye. It is a natural marvel that changes its appearance and can be seen at different times of the season, depending on that year’s snow accumulation amount, situation of snow melting, weather conditions and so on. Go see this mystical moment created by the great nature of Hachimantai that can be viewed only during this season. For lunch, you will eat local cuisine—buckwheat noodles (healthy food) with tempura deep-fried wild plants you have collected. You’ll make the buckwheat noodles under the guidance of locals. 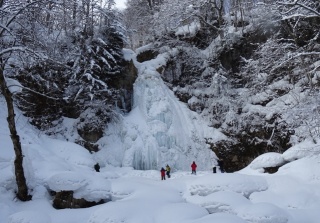