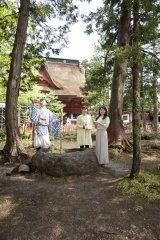 From the ancient times, it has been considered to be one of life courtesy to visit both the Ise Grand Shrine to the west and Dewa Sanzan to the east.

"Kagami-ike", which translates as the mirror pond located at the top of Mount Haguro has been an object of worship, and the "Kagami-Ike-Tokubetsu-Noukyou", is a tradition that has been handed down to the present day from the Heian period.

The "Kagami-Ike-Tokubetsu-Noukyou", the "Dewa-Sanzan-Jinja-San-Jin-Go-Sai-Den" (which loosely translates as the three gods festivals of the shrines of the three mountains of Dewa) and the "Higashi-no-oku-mairi-zen" which translates as the "Pilgrimage to the east", are local tours, all guided by the Yamabushi holy men.