Ikeda Sozaemon (trade name: Abumiya) was a wealthy merchant who prospered by operating a cargo vessel wholesale store that played the role of a transport agent for shipowners in the days when kitamaebune (cargo ships that sailed the Japan Sea) went back and forth. There were a number of cargo vessel wholesale stores in Sakata at that time, but Abumiya was special. He was prosperous to the extent that he was introduced as someone known by everybody as Sozaemon - the number one purchasers of rice in the northern lands - in Nippon Eitaigura written by Ihara Saikaku in the 17th century in the Edo period (1603 to 1868).

His residence was a typical townhouse structure that had a stone-weighted cedar bark thatched roof piled up with many stones. The inside is lined with more than 10 tatami mat rooms and wooden floor rooms facing a room with a dirt floor. Dolls and meals recreating the state of trading at that time are displayed here. This means you can learn about that prosperity. Kagaya, the second employer in the Oshin NHK morning television series, is said to have been based on Abumiya.

Opening Times
9 a.m. to 4:30 p.m.
Closures
Mondays from December to February (the next day if that Monday is a public holiday or national holiday) and December 29 to January 3
*Open every day from March to November
Directions
●Approx. 8 minutes by a Shonai Kotsu bus from JR Sakata Station and then approx. 2 minutes on foot after getting off at Honcho Shonai Ginko-mae
●Approx. 5 minutes by car from JR Sakata Station
●Approx. 10 minutes by car from Sakata Chuo IC on the Nihonkai-Tohoku Expressway
Car Park
Please use Sakata City Hall Parking Lot
Word-of-mouth
Reviews (TripAdvisor) 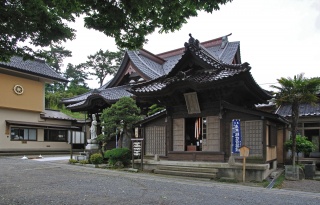