Features a collaboration of Western-style and Japanese-style architecture

This building, which was once used as a hospital, was relocated to inside Kajo Park and then opened to the public as Yamagata City Local History Museum (Old Saisekan Hospital Building). It has been designated as an important cultural property of Japan.

The building features a quasi-Western style of architecture constructed by Japanese carpenters to imitate Western architecture. The three-story tower that symbolizes the building has an octagonal stone-paved veranda on the first story and a hexadecagonal hall on the second story. It features a dome-shaped green roof. The third story, which is not open to the public, is a small octagonal room with a wide veranda attached. Although it has a three-story exterior, the interior is a complex structure with four floors. You can see the advanced skills of the craftsmen who could only make this building because of ancient Japanese wooden construction technology. The corridor surrounded by the first story has a tetradecagonal donut shape. This unique architectural form used the British Royal Navy Hospital in Yokohama as a reference.

The interior decorations are also worth seeing. If you look closely, you can see Western style and Japanese style elements everywhere. There are arch-shaped glass windows made by combining colorful glass. There are also Arabesque decorations carved onto the side of a spiral staircase made of Japanese zelkova. It is noteworthy for a rare architectural style that combines Western and Japanese styles. 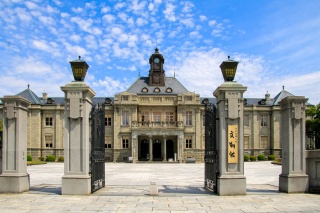