A mysterious space reached after walking 880 metres below the ground 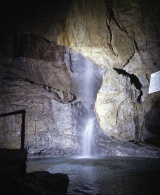 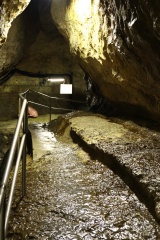 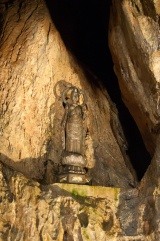 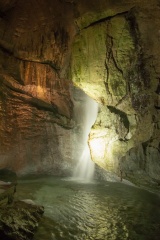 Rokando is a limestone cave made of marble. Surveys to date have confirmed that the total length of the cave is more than 3,000 metres. Fossils of marine life can be seen on the floor and walls of the cave, proving that it was once the sea floor.

The section open to the public has a total length of 880 metres, and a cave dome 50 metres in circumference and 60 metres high is found at the end of that section. The “Ama no Iwato no Taki” or “the waterfall of the heavenly cave” that falls from the crevices in the cave ceiling has a 29-metre drop and the basin forms an underground lake. The name “Ama no Iwato no Taki” was bestowed by female Japanese poet Byakuren Yanagiwara. She is the model for Renko Hayama played by Yukie Nakama in the NHK TV series ""Hanako and Anne.""

The area accessible to the public is well lit and there is no need for a flashlight, but the inside of the cave is meandering and has a low ceiling in some places, so walking without a helmet is very dangerous. When you purchase an admission ticket, you will be able to borrow rain boots, raincoats, and helmets for free, so please put them on and proceed carefully.