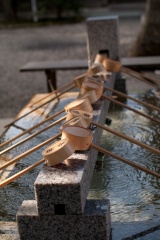 This is one of Japan’s three major Inari Shrines, and is visited by about 1.6 million people from around Japan each year. It is particularly popular at new year and at special festivals, when the shrine precincts are full to overflowing with people.

Within the shrine precincts are the Mukaikara-mon Gate, which is a Miyagi Prefecture designated tangible cultural property, and the two-storey Zuishin-mon Gate, which is considered to be a fine example of Edo Period architecture. The shrine is dedicated to three gods, Uka-no-Mitama-no-kami, Uke-mochi-no-kami, and Waku-musubi-no-kami, the guardian deities of clothing, food and shelter, which are worshipped for various purposes, including industrial development, bountiful harvests of the five cereals, and business prosperity.

The shrine was established in 842. It is said that Lord Ono-no-Takamura, whose name is also recorded in the classical Japanese anthology of poems Ogura Hyakunin Isshu, established the shrine upon his appointment as overseer of Oshu (Mutsu) Province, praying for the protection of the province. With the support of three generations of the Fujiwara Clan of Hiraizumi, followed by multiple generations of the Date family, the shrine’s deities are worshipped as being compassionate to the masses. 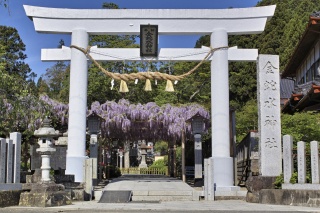