A popular spot for students taking exams! Pray in front of the rock that looks as if it might fall but doesn't! 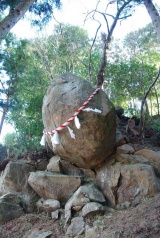 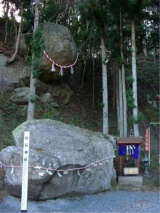 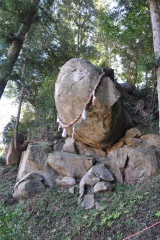 Tsuriishi Shrine, with its large rock jutting out from over a precipice that “looks as if it might fall, but doesn’t,” is famous as a place to come and pray for success in examinations and tests. The name “Tsuriishi” means a “rock that has been caught and drawn up on a fishing rod,” and just like its name suggests, the massive 14m circumference boulder stands on a precipice 5m above the ground. This sacred body is known as the “male rock.” The rock has attracted fame for remaining firm and never wavering, even in the face of disasters such as the 1978 Miyagi Earthquake and the 2011 Great East Japan Earthquake that severely damaged other places nearby. This is why the god of the shrine has become known as the “the god of examinations, who looks about to fall, but never does.”

It is a thrilling experience when you are on the ground looking up at the massive rock that really looks as if it is about to fall. The mystery deepens even further when you climb up close to the rick and see that there seems to be next to nothing keeping it in place.

Due to this mysterious ability to seem to be about to fall and yet not fall, the shrine is visited by people seeking success in their examinations and those praying for business success. Given the shrine name’s associations with fishing, it is also a place to come to pray for a good catch. In addition, the rock’s resemblance to a turtle makes it popular for people praying for a long life. It is also said to be popular among those seeking to find a marriage partner, couples seeking marital harmony, and those praying for the prosperity of their descendants.

As the shrine looks out across the reed beds of the Kitakami River mouth, reeds cut from the riverbed are made into twine, which in turn is woven into a massive twine ring that completely encircles the entrance to the shrine. As people who are taking exams walk under and through this massive ring they murmur the words “Yoshi, Goukaku” (“yoshi” being a word to express determination in Japanese, but also the word for “reed,” and “goukaku” being the word to “pass” an examination).