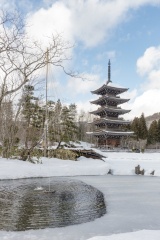 This is a temple with links to the ancient Taira Clan. Its official name is Joho-shu Gokuraku-zan Saihoji. It has been a temple for the common people that has become a place of solace and support for many people since ancient times.

800 hundred years ago, Taira-no-Sadayoshi, a member of the Taira Clan, which had just been defeated in the Battle of Dan-no-ura, barely escaped with his life, hiding out in the region where the temple stands today, and keeping safe in his possession an image of the Amida Buddha. It was at that time that he changed his name to Sadayoshi, which is said to be the origins for the name of this region, as “Jogi” shares the same Chinese characters as “Sadayoshi.” It is also said to be the reason why the image of the Buddha held in the temple is referred to as the Jogi-Nyorai.

In the temple grounds a five-storied pagoda was constructed as a symbol of appreciation to Lord Taira-no-Sadayoshi, to memorialise him and to pray for eternal peace for all humankind. On the seventh day of every month from March through to November the doors to the pagoda are opened. Although it is not possible to enter the pagoda, it is possible to see the principle image and pray to Amida Buddha from the main entrance.

After your visit, why not stroll through Monzencho and look through some of the many shops that line the streets? You could also try some of the Jogi specialities, like triangular cut deep-fried tofu and the unique grilled rice balls.

Address
宮城県仙台市青葉区大倉字上下1
Prices
Free
Opening Times
7:00-16:30
Directions
45 minutes by car from the Sendai Miyagi Interchange or Izumi Smart Interchange on the Tohoku Expressway
Take the bus bound for ""Johgi"" from Ayashi Station on the JR Kesennuma Line, and get off at Johgi, the final stop
Car Park
Yes (spaces for 300 cars)
Official Website
Visit this website
Word-of-mouth
Reviews (TripAdvisor) 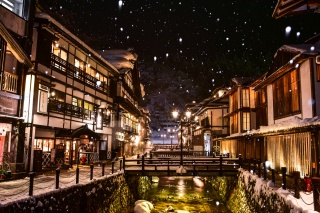