Our history is traced back to seishu (fine-quality sake production), started in the late Edo period. Murai Shuzoten sake brewery which was established in 1889 by inheriting brewing rights, started the production and sale of seishu "Momokawa." In 1944, the manufacturers in Kamikita-gun and Shimokita-gun, Aomori Prefecture, had been merged to establish Nihoku Brewing Company, Ltd., which was renamed afterwards to Momokawa Brewing, Inc., in 1984, and has continued up to present day. A giant Momokawa "sugidama, or cedar ball (also known as sakebayashi, or sake forest)" decorates their entrance lobby, which they say is “the largest giant sugidama in Japan"; this symbolizes the company's commitment to becoming Japan's No. 1 sake brewer. At the end of December they change its clothes, and a new sugidama comes out every year.

Duration
"About 1 hour
*About 40 minutes when the brewery is closed." 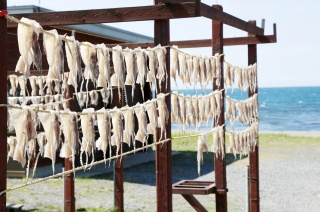 Exploration of footprints in the Japanese Heritage Site Ki…