A port city fireworks display with prayers for recovery 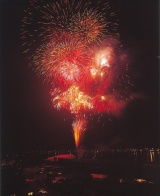 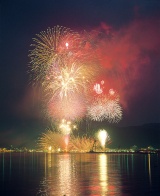 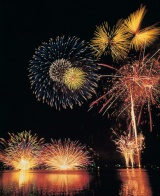 The Ishinomaki Kawabiraki Festival was started as a festival to give thanks to Kawamura Magobei Shigeyoshi, who saved Ishinomaki with flood control. Various festival events such as the Tairyo Anzen Kigan Festival and Kuyo Fireworks are held in the centre of Ishinomaki City and downstream of where the Kitakami-gawa River once flowed. Together with giving thanks for the blessings of the river, the festival was started to memorialise ancestors.

Various events are held including the Toro Nagashi in which floating lanterns are lit and placed on the water, a parade with Mikoshi portable shrines, a drum and fife band parade composed of elementary school students, and more.

The highlight is the fireworks display held on the night of the second day. The multi-coloured fireworks, which also express wishes for local recovery after the Great East Japan Earthquake, add beautiful colour to the night sky and the surface of the Kitakami River.

Depending on the year, an air show is also held by the Blue Impulse squadron of the Japan Air Self-Defense Force from Matsushima Air Base.