Folk entertainment heralding the coming of spring in a snowy area 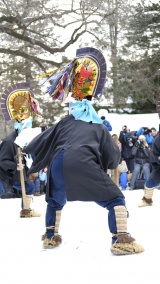 The Hachinohe Enburi Festival is a traditional event heralding the coming of spring with folk entertainment that is representative of the Hachinohe area. It has been designated as one of Japan's Important Intangible Cultural Properties, and is counted as one of the five major snow festivals of Michinoku (Tohoku).

The festival is intended to pray for abundant harvests for the year. Its major characteristic is the unique dance in which dancers known as Tayu wear eye-catching Eboshi headgear resembling horseheads and shake their heads intensely. The dance features movements that resemble the series of actions taken to sow seeds and plant rice. The cute blessing entertainment performed by children during the dancing intervals also delights viewers.

The festival is held in several locations including the city centre of Hachinohe as well as the Shimin Hiroba (People’s Square) in front of Hachinohe City Hall, Chojasan Shinra Shrine, Kojokaku, and the square of the ruins of Nejo Castle.