One of the three major Bon dances in Japan, and a national Important Intangible Folk Cultural Property 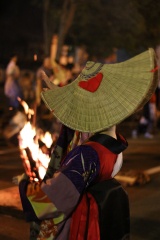 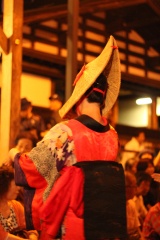 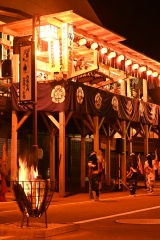 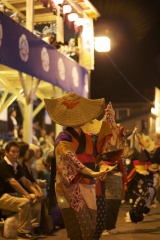 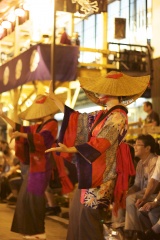 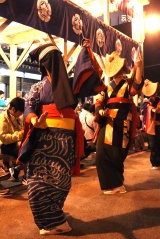 August 16th during the Bon Festival is the day to bid farewell to ancestral spirits. As the sun sets over the Dewa mountains, the music of the yose-daiko drum resounds in Nishimonai, Ugo Town. Soon after, well-dressed children perform the Ondo dance on Honmachi Street where bonfires are lit, and the three-day Bon Odori begins.

The Nishimonai Bon Odori is said to have started about 700 years ago. In 1935, the first public performance of this dance was held in Tokyo, which led to its formalization. In 1981, it was designated as an Important Intangible Folk Cultural Property due to the highly artistic characteristics this dance has. The traditional techniques have been passed down and refined, and a new history is being carved out. As the lively musical accompaniment and wild singing played on the yagura (high stage) reaches its climax, the circle of the dance widens.

Skillful dancers who cover their faces with braided hats and hikosa hoods join in, and indigo-dyed costumes with gorgeous embroidery stand out against the bonfires.

The haiku poet Hekigoto Kawahigashi, who happened to see the festival during his stay in 1907, wrote, "For the first time, I saw a Bon dance that made a good picture." The dance has a fascinating curved beauty of interwoven graceful hand gestures and foot movements. The participants dance wholeheartedly in unison with their ancestral spirits, wishing for an abundant harvest. 100,000 viewers are intoxicated by the dreamy world of the musicians, dancers, and bonfires.

A thematic journey in the Tohoku region:Festivals 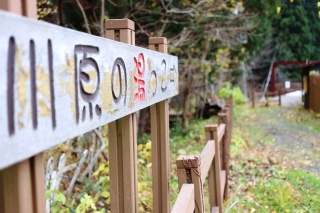 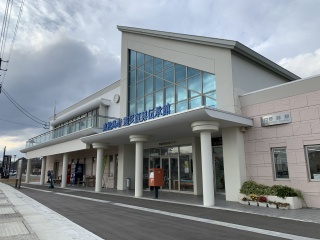