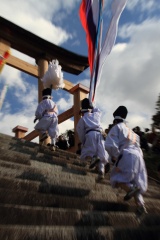 Amidst the reverberating sound of conch shell trumpets in a mountain village in winter, there is the magnificent sight of people clad in white clothing heading toward Mt. Kohata with hundreds of five-coloured Gotan flags. It is one of the three major flag festivals of Japan.

Young men around 18 years old who are first to participate in the festival are known as Gondachi, and there are also adulthood initiation rituals such as the “Tainai Kuguri” (passing through the womb).

The origin of the festival lies in the historic event when the Minamoto forces that had been defeated in battle retreated with just a few horses to Mt. Kohata. The Abe forces that had been following them mistook the accumulated snow that blanketed the mountain in white overnight to be white flags indicating a large force, and they took flight. With the rituals handed down since long ago remaining strong in the festival, it is a designated National Important Intangible Folk Cultural Property.

Address
福島県二本松市木幡
Directions
About a 30-minute drive from the Nihonmatsu Interchange on the Tohoku Expressway to the Kohata Residential Center
Date
First Sunday of December every year
Venue
Kohata, Nihonmatsu City, Fukushima Prefecture