One of Japan's three bizarre festivals, where naked men crowd together in the deep snow 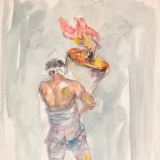 The Naked Man Pushing Festival is held each year in snow that is usually more than 2m in depth and lays claim to being one of Japan’s three bizarre festivals, being also designated as an important national intangible folk cultural property. Approximately 1,200 years ago Sakanoue no Tamuramaro built a temple on this spot in which he worshipped the Bishamonten, one of the four great heavenly kings of Buddhism. It is said that the festival has its origins in the singing and dancing at the temple that boosted morale among soldiers.

It was once the case that this festival was held on the third day of the New Year, and when the temple door was opened people would jostle each other to be the first to offer prayers to the Bishamonten, and also seek good fortune to ward off disaster at the beginning of the year. Eventually this became mixed with the tradition of people dipping in icy water before entering the temple and so it was that more and more people attended wearing only their loincloths. This spirit has been passed down to the modern-day event and a great crowd of men naked from the waist up all chant “San-yo, san-yo” in unison, jostling each other to see who can get through to the upper chamber to be the first to offer prayers to the Bishamonten. It’s a soul-stirring and awe-inspiring festival! What is more, the men carry a massive 30kg lit candle through the streets, which is where the festival gets its other name of “Large Candle Festival.”

Although limited to male participants only, anyone is welcome to join in, so why not take up the challenge? Loin cloths are available for purchase at the event venue.