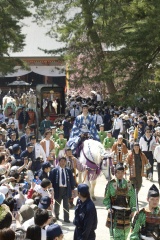 The Fujiwara Festival is held every spring and autumn in the World Heritage town of Hiraizumi. The festival in spring from 1-5 May is particularly extravagant.

During the festival period, various events are held at locations throughout the town including Chuzen-ji Temple and Motsu-ji Temple. There are various festivities such as the children's parade, folk entertainment, and Benkei strongman contests, but the greatest highlight is Minamoto no Yoshitsune's Eastern Flight Processional on the third day. It recreates the scene of Fujiwara no Hidehira welcoming the arrival of Yoshitsune in Hiraizumi after fleeing north from the pursuit of his brother Yoritomo. A famous performer is selected annually to perform the part of Yoshitsune. The performer rides a horse and ox-drawn carriage, accompanied by a troupe of strong samurai including Benkei in mountain priest’s clothing and handmaids, and processes from Motsu-ji Temple to Chuzen-ji Temple. The large procession of 100 people dressed in period clothing is dazzling, just like a picture scroll from the Heian period, and loud shouts ring out among the tourists who pack the route.

In addition, the Ennen no Mai ritual dance performed at Chuzen-ji Temple is a very precious within Japan, and is a form of classic entertainment that is a designated National Important Intangible Folk Cultural Property.