Enjoy stunning seaside views from the charming train running on this bridge over the sea!

The Sanriku Railway, also known locally as Santetsu, runs north-south along the coast of Iwate. Osawa Bridge is located between Horinai and Shiraikaigan stations on the Sanriku Railway Rias Line.

The Sanriku Railway Rias Line features splendid seaside views interspersed with a number of tunnels as the line passes along the mountainous coastline. The highlight is the view of the Sanriku Coast when crossing Osawa Bridge.

Osawa Bridge gained fame after appearing on national broadcaster NHK’s popular TV drama series “Ama-chan”, a major hit of 2013. The bridge reminds fans of one of the series’ most famous scenes.

Horinai station also appeared in “Ama-chan” and is located on a hill from which visitors can enjoy a panoramic view of the Pacific Ocean. From the station a 15-minute walk takes visitors to Horiuchi Ohashi Bridge which is a great location from which to view Osawa Bridge with the ocean in the background. The rest house located across the bridge has long been popular with photography and railway enthusiasts as it offers the best view of Osawa Bridge.

You may need a bit of luck to see a train passing along the bridge as most days have only five services each way on the Sanriku Railway Rias Line. The view of the bridge with the Pacific Ocean in the background is stunning regardless!

Shiraikaigan station is a peaceful unstaffed station listed at the top of “Japan’s most extraordinary and secluded train stations”. Come and see it for yourself! 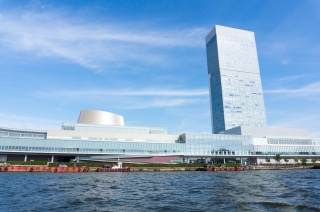