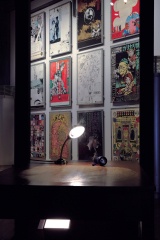 The Shuji Terayama Museum was built over a period of about three years to preserve and display the personal articles of Shuji Terayama, donated to Misawa City by his mother Hatsu. Based on the designs by Kiyoshi Awazu, who had a close relationship with Shuji Terayama, the museum opened in 1997 with the advice of a number of stakeholders, including Kyoko Kujo and other members of the former theatrical troupe, Tenjo Sajiki.

The exhibition building and the foyer are connected by a covered passageway, and when viewed from above, looks like the wall clock that appeared as a prop for Terayama's theater performances and movies. On the outer wall of the foyer are a number of ceramic plates with messages from about 30 people who interacted with Terayama and many other plates on the theme of Terayama's work, which give it a unique appearance.

Inside the museum is a reproduction of the stage and movie set of the theater troupe Tenjo Sajiki, hosted by Shuji Terayama. Enjoy this avant-garde display and a surreal world view that you can see and touch.

Opening Times
09:00 to 17:00 (admission until 16:30)
Closures
Mondays (if Monday falls on a holiday, the following day), Year-end and New Year holiday (29 December to 3 January)
*Typically closed on the first second, and third Monday of August every year
Directions
● About 12 minutes by taxi from Misawa Airport
● About 17 minutes from Misawa Station on the Aomori Railway
Car Park
Yes
SNS
Twitter
Word-of-mouth
Reviews (TripAdvisor) 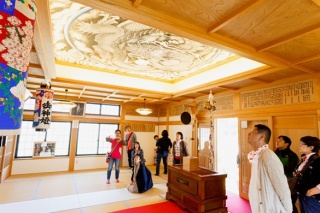