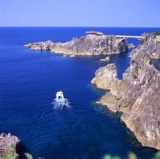 “Senkaku Bay” is the collective name for five small interlinked bays that stretch along the coastline for approximately 3 km in towering spire-shaped cliffs up to 30m in height. The bay was given its name due to the fact that it is said to resemble the beautiful spire-like cliffs of Hardanger Fjord in Norway, which is called one of the most scenic spots in the world (the Japanese character “sen” being used to describe the towering cliffs of Norwegian fjords).

From the observation deck in Senkaku Bay Ageshima Park you can see the entire bay area. In winter the scene is one of dynamic power as the waves crash furiously on the rocks on shore. When the waves calm after winter a nice activity is to take a glass-bottomed boat tour around the bay area (boats run from mid-March to the end of November). The sea as seen from the boat is extremely clear and the sight of the fish that come to eat the food thrown in the water and the deeply crevassed seabed are truly spectacular! There are also many seabirds like gulls and kittiwakes, and it is fun to feed these birds from the boat too.