A desolate and eerie sight that looks exactly like Jigoku ("Hell") 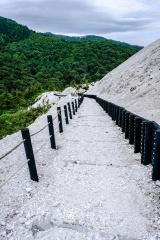 Kawarage Jigoku is one of the three major sacred places in Japan, along with Mt. Osore in Aomori and Tateyama in Toyama.

Kawarage Jigoku was reportedly opened in 807 by the Buddhist priest Gesso, and the mountain covered in gray-white lava rock speaks to its past and present volcanic activity. Because there is no vegetation on its gray mountain surface, steam blowing from everywhere and the strong sulfur smell that lingers in your nose, you get the impression of being in Hell. The rugged and scraggly slopes create a bleak and eerie sight.

Nearby is the Kawarage Oyutaki (large hot waterfall), a rarity in Japan, in that the waterfall itself is a hot spring. The hot spring that wells up from the ground about 1 km upstream merges with the stream water and spectacularly drops from a height of 20 m. The waterfall basin and mountain stream are all natural open-air baths, making it one of the best bathing waterfalls in Japan. It is popular not only with local residents, but also with tourists who heal their weary bones from hiking in the mountains. The bath is about 15 minutes walk from the parking area, and is open from early July until mid-September. A simple changing area is set up during the bathing season, so put on your bathing suit and enjoy the bath. 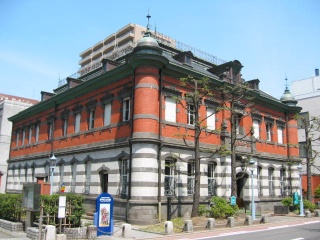 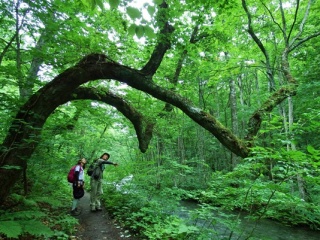 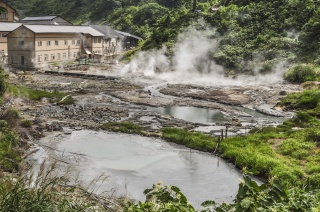 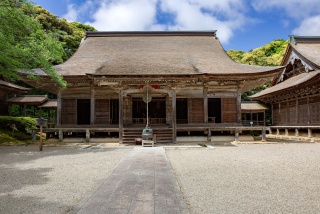