Small castle with the elegance of a wooden structure: View the city from a castle tower on high ground

Shiroishi Castle (also known as Masuoka Castle) is a castle on a hill in the plains in what was once the center of Shiroishi. It is historic site designated by Shiroishi City. It was a strategic point in the south of the Sendai Domain. It was the castle of the Katakura Clan who served as senior retainers to the Date Clan for 260 years after the Battle of Sekigahara to the Meiji Restoration. The tower of Shiroishi Castle was demolished in 1874. It was later rebuilt 120 years after that in 1995. It is highly acclaimed academically as one of the few wooden restorations in Japan. It also boasts a height and size in the top class in Japan among post-war wooden reconstructed castle towers.

There are approximately 400 cherry trees in Masuoka Park where Shiroishi Castle is located. The best time to visit is around mid-April. You can also see the fireworks display of Shiorishi Summer Festival from the tower of Shiroishi Castle in the summer. The best time to see the fall leaves is from around later October. You can enjoy the contrast between the beautiful mortar Shiorishi Castle and the fall leaves. A chrysanthemum exhibition is held at the same time, so the castle is brilliantly colored at this time. In winter, the oxidized silver roof tiles and natural wood colors provide an exquisite harmony among the white of the snow and the white of the mortar. You can see natural colors not found in the present age. Please make sure to check out Shiroishi Castle with its natural colors against a background of Mt. Zao clad in snow. 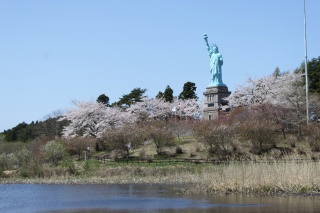