A thrilling spectacle! Watch as fighting bulls weighing more than a ton clash with each other! 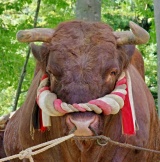 For farming the terraced rice paddies hewn out of the sloping mountainsides it was once the case that oxen with strong legs were a precious necessity. In regions with heavy snowfall that were cut off from other communities for long periods during the winter it was normal for humans and their cattle to live together under one roof, with the cattle being treated as one of the family. The bullfighting of Yamakoshi has its roots in this close relationship between the bulls and their owns. The tradition of bullfighting is said to date back 1,000 years and is designated as an important national intangible folk cultural property.

The bullfighting or “locking of bulls’ horns” of Yamakoshi is characterised by the fact that each match is a drawn match, out of a desire to not injure the bulls, which are like part of the family. The men who handle the bulls are called Seko and it is truly thrilling to see how they get between the bulls to separate them after the furious crash of the locking of horns.

There is also a memorial gallery at the Yamakoshi Bullring, which introduces the history of Yamakoshi and its bulls. The gallery is open every day except on fight days. 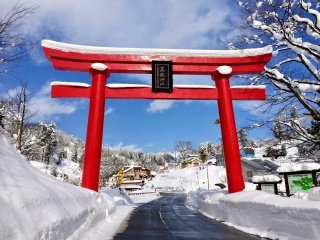