The Saito Risuke Family were wealthy merchants who flourished over seven generations from the late Edo period (1603 to 1868) to the early Showa period (1926 to 1989). They developed a wide rage of business including the sale of textiles and drapery in addition to the brewing of miso and soy sauce, and sewing. The Sairi Yashiki is the renovated residence and kura (storehouse) of that family which has been opened as Kura no Kyodokan.

There are seven kura (one is not open to the public) and two homes where clothes and artworks of those times are exhibited. Combined with six buildings and structures (e.g., kura and stone bathtubs), 12 buildings were registered as tangible cultural properties of Japan in 2010.

Various special exhibitions are held here throughout the year. These include the three large exhibitions on the themes of the Boy's Day Celebration, Welcoming the Anniversary of Sairi and the Sairi Doll's Festival. Sairi Genya is held in early August. This is a summer tradition in which the Sairi Yashiki and the avenues around it become one to serve as the venue. Approximately 1,000 hanging lanterns with pictures create a magical space. You can experience time as through you have gone back to the Taisho period (1912 to 1926).

In addition, the Taisho Roman Kissa cafe on the second floor of the shop kura is a calm space with an antique mood in which light shines through the window. The monthly set meal which changes every month and which allows you to enjoy the seasons is very popular.

If you only use the Taisho Roman Kissa, you do not need to pay the admission fee for Sairi Yashiki. 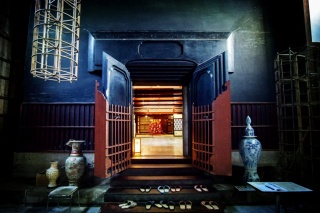