You might be able to get a picture of the fire-breathing Godzilla!

Godzilla Rock is a rock on the craggy shore of Shiosezaki, on the southern side of the Oga Peninsula, named for its silhouette resembling Godzilla. It is made of lapilli tuff from a volcanic eruption about 30 million years ago.

The best time to see Godzilla is at sunset. Throngs of photographers and tourists come to take shots of Godzilla ""breathing fire,"" as the sun sets and red clouds cover the mouth of the rock to look like flames. April and October are the best months for taking photos of Godzilla breathing fire.

Godzilla Rock is one of the geopoints that make up the Cape Shiosezaki Geosite, at Ogata Geopark on the Oga Peninsula. This geosite is known for its many strange rocks, and in addition to Godzilla Rock, there is also the Godzilla's Tail Rock, Gamera Rock, Twin rock, and Hakakejima, which are all registered as part of the 100 Curious Rocks of Japan. 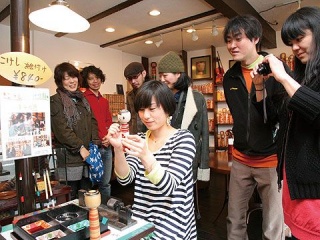