Perched on a small island jutting out into Matsushima Bay with a vermilion-lacquered bridge connecting it to the mainland, Godaido Temple is the traditional symbol of Matsushima and a scenic location from which to view the bay.

The small temple was originally founded as Bishamondo by the famous general Tamuramaro Sakanoue in 807 and took its name Godaido when the priest Ennin installed images of the Five Wisdom Kings in 828. The temple opens its doors to the public for the viewing of these images only once every 33 years.

The present temple is the one founded by the celebrated feudal lord Masamune Date. The meticulous carvings of the 12 signs of the zodiac under the eaves reflect the artistic style of the Azuchi-Momoyama period which flourished between late 16th and early 17th centuries. Godaido Temple is designated an Important Cultural Property as Tohoku’s oldest building in the style of the Azuchi-Momoyama period.

When walking across Sukashi Bridge connecting the mainland and Godaido Temple visitors can observe the water below through the wide gaps in the bridge floor. These gaps were intentionally left so that visitors would brace themselves before praying in the temple. The original bridge was in the form of a ladder, two horizontal boards were later added to allow an easier walk.

Legend has it that one night the image of Bishamonten (Vaisravana) that was enshrined by Tamuramaro Sakanoue at Bishamondo flew away to an offshore island when the priest Ennin installed the images of the Five Wisdom Kings at Bishamondo as a part of Enpukuji (Zuiganji), after which the island took its name and became Bishamon Island.

Visitors enjoy the spectacular view of the floating islands of Matsushima Bay while reflecting on this legend. Visiting the twin temples of Zuiganji and Godaigo makes for a magical Matsushima experience! 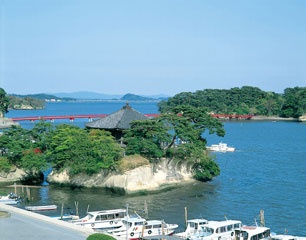