Enjoy the beauty of the gorge and search for the heart-shaped indentation in the rock! 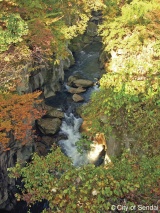 Rairaikyo Gorge is close to Akiu Onsen town, where the Natori River valley becomes extremely narrow. The gorge continues for approximately 1km up and downstream from Nozoki Bridge, which stands at the entrance to the town, and is characterized by the powerful water flows that grind down the rocks and the imposing rock formations themselves. The gorge itself presents a dynamic impression with a maximum depth of 20m.

On the downstream side of the gorge is a pathway and a round-trip stroll along here can take a between one and two hours. Along the way be sure to look out for the sometimes bizarre and also beautiful rock formations and waterfalls, including Hachikeniwa Rock, Nariaisoko Rock, Kimeniwa Rock, Shigura Falls, and Misuji Falls.

The beauty of the gorge is enhanced in late spring when the new greenery is at its most fresh, and also during the golden leaves of the autumn season. At both of these times the leaves on the trees reflect beautifully in the waters of the gorge, delighting visitors. From late-October to mid-November the gorge is illuminated. Why not enjoy a stroll through the gorge at night, marvelling at the scattered lights that illuminate the darkness and the various artworks and installations created for the event?

Also, as you look down from Nozoki Bridge, see if you can spot the heart-shaped indentation in the rock that has gained this location a designation as a “Lover’s Sanctuary.”

Address
宮城県仙台市太白区秋保町湯元
Directions
15 minutes from Sendai-Minami Interchange on the Tohoku Expressway
55 minutes by bus from bus stand No. 8 at the West Exit of Sendai Station (Take the Miyagi Kotsu bus bound for Akiu Otaki and get off at ""Nozoki-bashi"" bus stop)
Car Park
Yes
Word-of-mouth
Reviews (TripAdvisor) 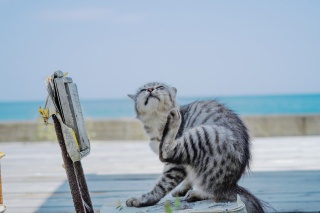